Sacks on a camping trip 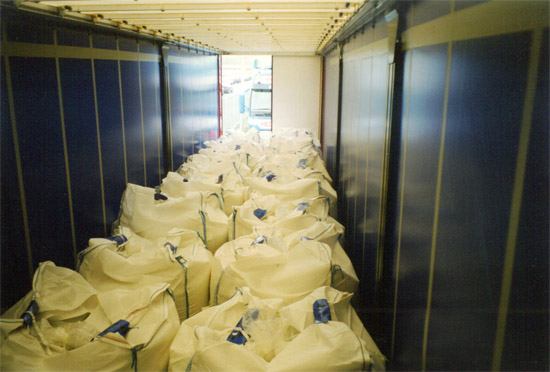 Figure 1 shows a full load of big-bags on a curtainsider. The curtainsider was new and the loading area showed no signs of use. This meant that the loading area was particularly smooth and had a low coefficient of friction. The sides had not been reinforced and had no removable wooden gates or protruding edges to the loading area. The roof also had no diagonal reinforcement struts. As far as the load securing concerned, this scenario is akin to a mobile camping trip for the load. The load of big-bags was not secured and, to add a little spice to the situation, was not just being transported by road, but was setting off on an intermodal road/ocean/rail voyage.

People often try to secure loads like this with tie-down lashings. This cannot be done without the use of additional materials, for instance a pallet placed on top of the bag, as the lashing belt can work into the material and within a short time, all the pre-tensioning force has gone from the belt. Even if pallets are placed on top of the big-bags before they are lashed down, the bags can still become deformed during transportation, with the result that the securing effect drops towards nothing.

It is always recommended that at least part of the cargo is loaded as a tight fit to the front. It is no problem to secure two tiers of big bags in fours to the side using loop lashings. The ratchet handle loops can be successfully used to counteract the risk of the belts slipping down the sides of the bags. Another elegant solution to the problem of securing big-bags such as these is to use load securing tarpaulins. Such tarpaulins fulfil a variety of roles: