Cry "havoc" and let slip the load for sure


There are times when truth is stranger than any fiction.

One of our fellow creatures with a considerable imaginative talent was faced with the problem of transporting a load of boards home – long boards at that. And even though it would appear that these boards were not rigid enough for the journey, our genius knew a way of solving the problem. He put his car’s trailer through a quick toughening-up regime to prepare it for the load. 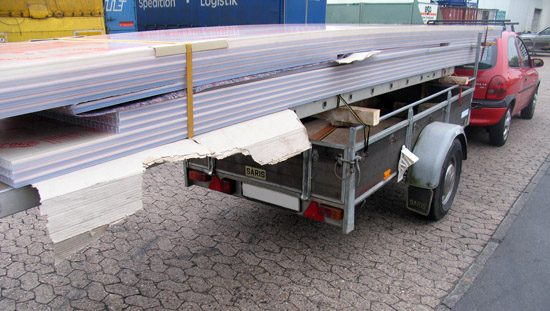 The loading area was too small, and it wasn’t feasible to transport this load at an angle because it was too delicate – not to mention too long. And so it was necessary to construct an "artificial" loading area. Two pieces of squared lumber formed the basis. On top of these were placed two aluminum ladders. These ladders provided sufficient bending strength to allow the boards to be loaded on top of them. Magnificent!

The load securing methods used are also ingenious. The squared lumber was placed on top of the bars of the tailgate and end wall of the trailer. The ladders were "secured" to the trailer, otherwise the boards would have tipped off as soon as they were loaded. The boards themselves were srapped together with the ladders to form a bundle. At the front, the bottom package passed under one rail of the trailer and the top package rested on the rail. Because they were bundled together, this prevented the boards from tipping backwards. Which is an achievement that perhaps not everybody would have managed. 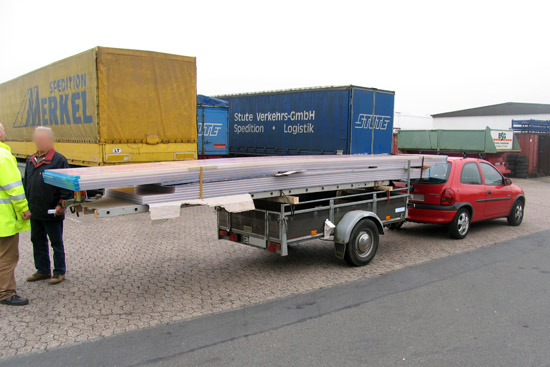 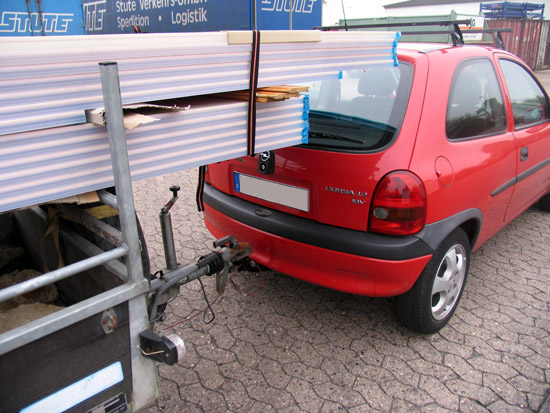 Even under the slightest braking load, the load would have paid the driver a visit.

This load was extremely slippery, which did not make securing it any easier.

What is the proper way to transport something like this?