A truck and trailer loaded with prefabricated concrete ceiling panels had to brake from around 40 kmh in a built-up area due to traffic conditions. If we draw the comparison with the "game" alluded to in the title, the driver was lucky. If he had braked harder or if he had been driving faster, it could well have cost him or other road users their lives. 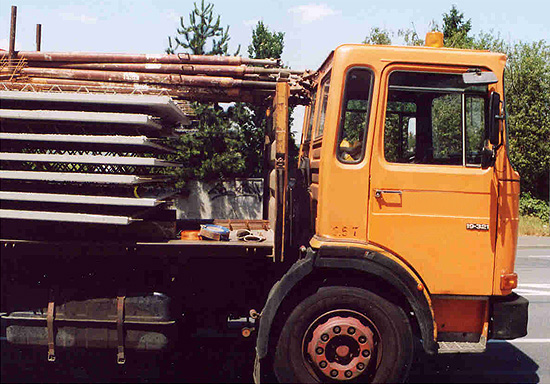 Despite being "secured", the entire load shifted forward and damaged the cab. 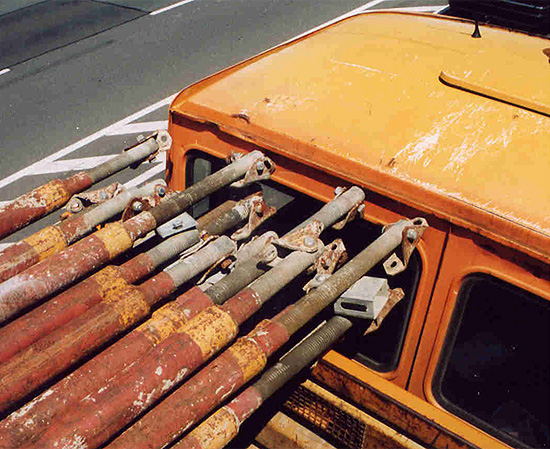 So why did the load shift? 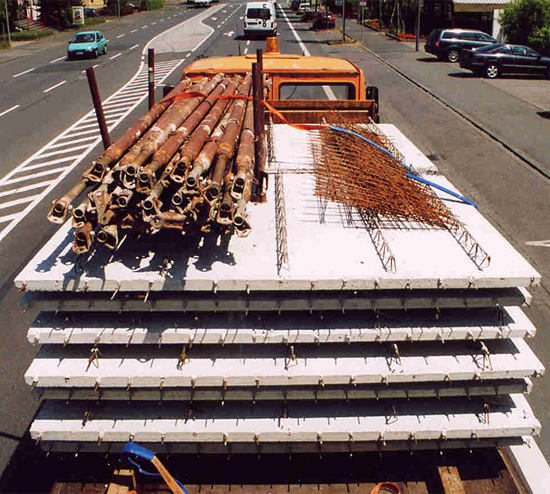 Figure 3 clearly shows that the load included a number of sheets of structural steel mesh and a loading frame containing ceiling supports. No account was taken of the fact that the lashing belt was only able to generate a minimal securing force over the steel mesh and that the different angles caused by the loading frame meant that the pre-tensioning force was distributed unevenly over the load.

Figures 1 and 2 clearly illustrate that a loading frame is utterly unsuitable for combining the metal supports into a load unit in the absence of an end wall (or preferably two). Despite the fact that they had concrete residue attached to them, the supports had a lower coefficient of friction than the concrete ceiling panels and slipped far further out of the loading frame (right up to the cab).


The entire load was resting on two I beams placed on end. The geometry of these beams (the ratio of width to height) meant that they were at risk of tipping (see figures 4 and 5). Neither rectangular formats placed on edge nor square formats are suitable to support a load. Rectangular formats "fall over" and thus reduce the circumference of the load, which in turn means that any pre-tensioning is lost. Square dunnage promotes rolling of the load, as this geometry is similar to a circle. It is recommended that only rectangular formats placed flat should be used as dunnage. 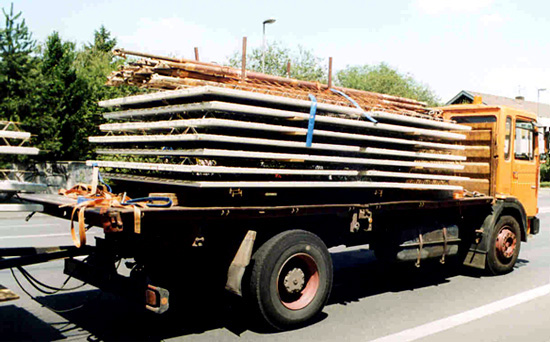 
Because the steel beams had tipped, there was no pre-tensioning force left and the load shifted forward unsecured (Figure 6). The steel ceiling supports were only stopped by the cab. 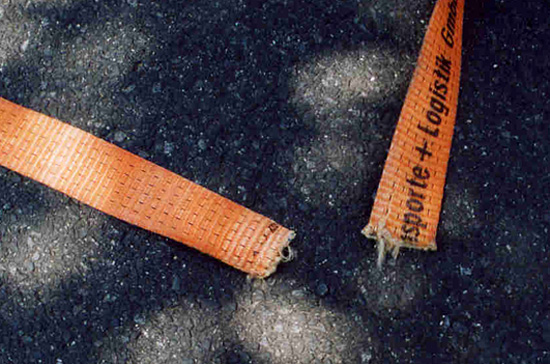 
When the load shifted forward, the two lashing belts were simply cut through by the sharp edges of the concrete load (Figure 7). If belts are used to secure concrete components, they should always be protected effectively against the sharp, abrasive edges of the load (e.g. with protective sleeves). 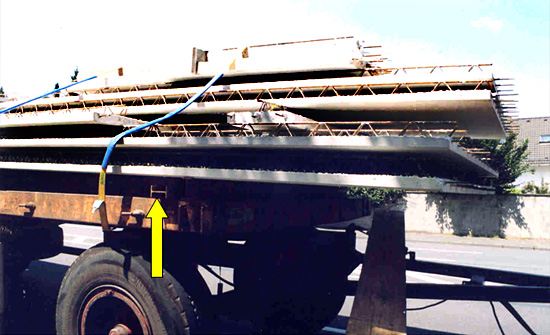 
But the trailer also was incorrectly loaded. Here also, the steel beams supporting the load tipped over (Figure 8).

The pre-tensioning force immediately fell to zero and the lashings had no effect whatsoever. The load shifted forward far beyond the front edge of the trailer. In circumstances like this, it is fortunate that the truck was not cornering when it braked. 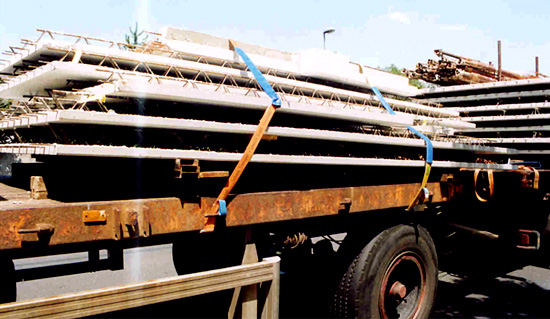 
Because the lashing belts were loose and completely ineffectual, they simply shifted with the load. One of the belts must have become trapped and suddenly built up an uncontrolled pre-tensioning force. The kinetic energy and/or the sharp edges of the load became its downfall and it failed. 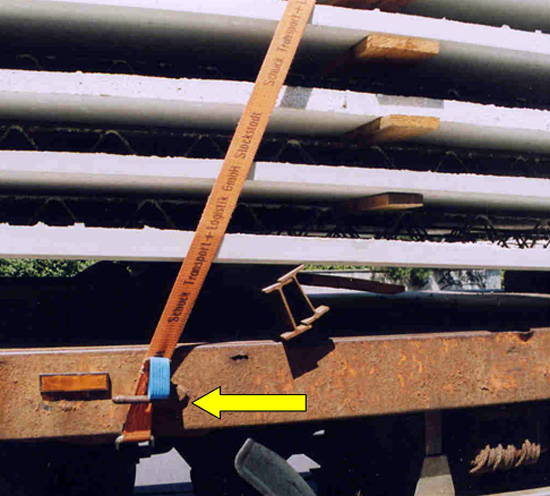 
The supporting steel beams acted as rollers (Figure 10). Fortunately, the lashing belt was prevented from slipping further by a side-wall hinge, so that the load was brought under control and didn't fall from the vehicle.


What is the right way of securing filigree slab concrete?

As a fundamental rule, tight-fit securing should always be preferred with load weights of this magnitude. One way of doing this is to make use of the existing elements of the vehicle, and another is to use stanchions that can be inserted at different positions on the vehicle and the trailer. Because it is often the case that the boundaries of the loading area cannot be utilized for tight-fit securing for reasons of load distribution or because of the risk of the load damaging the end wall, it makes sense to fit two rows of stanchion sockets (sleeves) that can accommodate the stanchions as required (according to the demands of load distribution). The load can then be loaded as a tight fit against these stanchions. A loop lashing can be used to considerably increase the securing capacity of these stanchions.

As a rule, two loop lashings for each degree of freedom are sufficient for any weight of the load stack, provided that it was possible to load it by and large homogeneously. Load-securing equipment and load-securing points with a greater lashing capacity (LC) provide additional safety without any additional effort in securing the load.

The relevant literature quotes coefficients of friction µ of 0.4 through 0.65. Here is not the place to discuss which of these can be applied safely in practice. One thing is certain: All coefficients of friction, no matter how they have been determined, are negatively impacted by dirt, snow and ice (in some cases very considerably). Direct lashing systems are not susceptible to such influences, although friction is also taken into account with this type of securing.

Dunnage should always be of a rectangular format and should be placed flat. This rectangular shape means that the dunnage is stable and does not roll under load.

Considerations of friction mean that it is sensible to have a loading area made of lumber or lumber-derived materials. But other materials can also be used for the loading area, since it is possible to use friction-enhancing materials to boost friction.

Because concrete slabs are often stored in the open, ice and snow can present a problem in the winter months. Snow can be swept from the loading area mechanically and salt can be used to remove ice. Such measures would represent an absurdly high outlay for the concrete slabs. If snow-covered slabs such as these are to be secured, this can be done either by tight-fit securing or by direct lashings. Friction should not be taken into account under these circumstances. This allows the load to be safely transported even under adverse weather conditions.