Figure 1 shows a load-securing accident where the results of the laws of physics had a certain aesthetic appeal. After a braking maneuver in traffic, a large number of aluminum sheets that had previously been stacked relatively high ended up spread from trailer to cab, right across the tractor truck and drawbar. Some of the aluminum sheets were loaded in loading frames, but we don't know how these had originally been secured to the vehicle. After the truck had had to brake in traffic, one of the loading frames remained on the loading area and the other one containing the high stack of aluminum sheets slipped from the trailer, over the drawbar and against the tractor truck. The load was "secured" with two tie-down lashings. Figure 2 shows the tie-downs, which had slipped with the metal sheets and had become detached from the vehicle in the process. The pictures do not show whether the lashings failed or simply slipped forwards.

The basic approach is correct, namely to load unstable sheets such as these, which are differently corrugated, in specially constructed loading frames in order to stabilize the load unit. In the case of this load, the sheets probably extended far beyond the loading frame when they were loaded, with the result that the tie-down lashings had to secure the sheets to the loading frame. Since the maximum coefficient of friction of corrugated sheets, which may also be dirty, can be assumed to be µ = 0.1, the securing method chosen was unsuitable for this load. 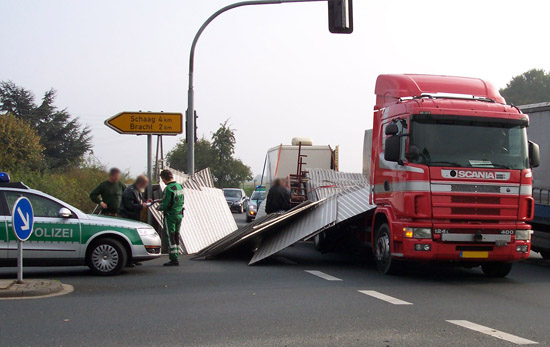 If the load securing method is not only to secure the load to the vehicle, but also to create the load unit itself, it is vital that direct lashings are used. To form heterogeneous stacks of metal sheet such as these into a load unit, it makes sense to first strap them in both directions and then to secure them to the vehicle with direct lashings or tie-down lashings. Care must be taken to ensure that the lashing belts are not damaged by sharp edges.


But the conclusion is that securing of this type is always less than perfect for two reasons: 1). it is time-consuming and complex 2). it is susceptible to errors. Reliable securing of loose sheets that are constantly being loaded and unloaded is only possible in loading frames that are able to ensure a tight-fit in all directions. These loading frames must then be attached securely to the loading area with twist locks, spikes or similar mechanisms. They can then be prevented from tipping or similar loads by securely lashing them to the vehicle with tie-down lashings.