This compacct car had a narrow escape. The driver may well have thought that all their birthdays had come at once. 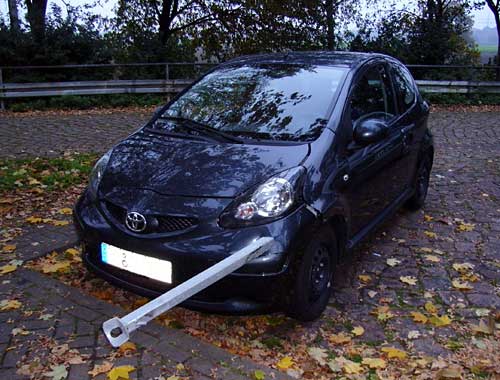 
So what happened? Since the party responsible could not be traced, the explanation below is pure speculation.

So far so good. To all appearances, the load was tidy and correctly stowed. Two belts were used at the front and two at the back to secure the load. And so the vehicle and its load set off for home, which was, after all, only some 12 kilometers away.


And then, on the way, it happened:

The scaffolding planks were lashed down, but were not only subject to downward force, but also to diagnoal forces towards the middle of the vehicle. From the moment the vehicle set off, the vibrations and jolting of the journey caused the boards to shift towards the center of the vehicle. The result was that the pre-tensioning in the lashing was lost and increasingly, the boards were unsecured.

The small scaffolding materials that were in between the two stacks of boards also made use of the vibrations to very slowly shift towards the rear of the vehicle. There, they came up against the tailgate or became entangled as a result of the cement residue.

And then a rather larger dip in the road finally did it: One of the small scaffolding tubes managed to escape over the tailgate and fell onto the road, where it bounced and hit the small, blue car.

To start with the driver of the car didn&apos;t notice the impact. When he got out, he couldn&apos;t believe his eyes! 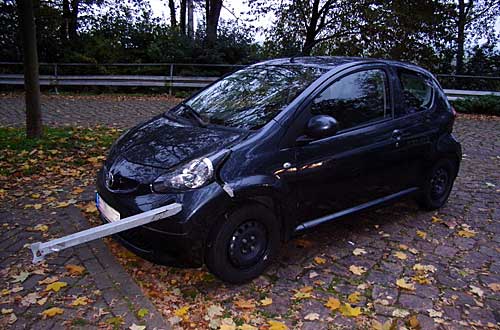 To allow scaffolding materials to be loaded safely, the vehicles should be equipped with transport frames that allow the material to be loaded as a tight fit.

Boards should be loaded against the headboard wherever possible and should be restrained by stanchions to the side.

Transporting loose loads, even small components, can be a fatal mistake. This time, the driver of the car had a lucky escape.