Packaging, the formation of cargo units and load securing go hand in hand. Good packaging, correctly executed, is the prerequisite for economical and sound load securing.

The demands on the packaging are high, as it has to perform a variety of functions. In the case illustrated here, it is the protective function of the transport packaging that has quite clearly failed. 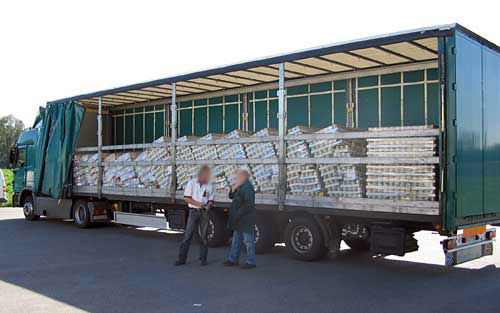 For the purposes of this example, we shall desist from splitting the undoubtedly interesting semantic hairs of precisely what it is about this load that is "safe to transport" and what is "operationally safe". For this discussion, it is sufficient to note that a straightforward braking maneuver was sufficient to put the load in the state we see in the photographs. 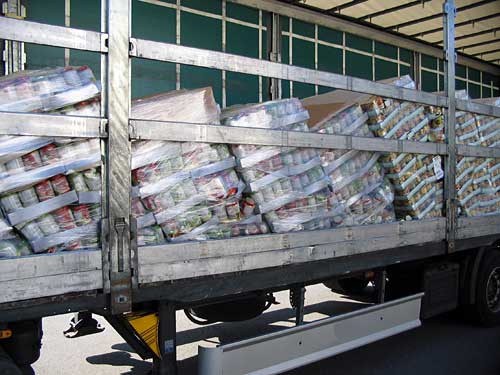 The load is made up of cans and some conical containers (possibly screw-top jars) covered with plastic film. These containers were packed in open boxes and the boxes were stacked on pallets. The cargo unit was then "secured" with stretch film and some intermediate layers.

Securing of the cargo unit was indubitably insufficient, as the cargo units were so "soft" that they were able to shift and come apart during braking. It is probable that gaps in the load promoted such movement. Load securing measures can be sought in vain!

The driver and all other road users that were in the vicinity at the time can count themselves lucky that the vehicle was not also cornering at the time – that would almost certainly have resulted in large-scale "contamination" of the roads around the area with cans of soup.

In this example, the benefits of cargo units, namely fast and easy transshipment, have entirely vanished. Instead, not only has the cargo been damaged and delivered late, but the cans must all be laboriously unloaded and new cargo units must be formed.

How is it possible to improve securing of the cargo units in this case?


Because the cargo units are still not entirely stable despite the measures listed above, a vehicle with a suitable body should be used. It must allow the cargo units to also be secured to the sides as a tight fit.

The first three or four rows of pallets can be secured directly in the form of a tight fit against the load-bearing end wall in the direction of travel. As of this point, with unstable cargo units such as this, it is necessary to absorb the forces that build up during braking. This could be done using a vertical plywood board or pallet etc. combined with a belt arranged as a loop lashing (bight) around the board.

The sketch below illustrates this option. For the purposes of clarity, securing to the side, for instance using tie-down lashings, has not been shown:

The belt can be prevented from slipping off using a pallet or similar. The belt should be attached at approximately the height of the center of gravity. Depending on the stability of the cargo units, forces should be absorbed in this way three or four times. The load can also be secured to the rear using a board and one or two belts (depending on the weight of the load).

The ideal solution would be cargo units formed from stable transport packages, stowed in an interlocking manner and stabilized with intermediate layers of friction-enhancing material (e.g. suitably coated paper).

The transport packages used should meet the requirements of modularity, in other words, they should fill up the pallet without protruding or falling short of the edge. All the corners should then be fitted with corner protectors to allow the unit to be strapped or covered with shrink film.

A cargo unit formed in this way can then be loaded as a tight fit. Minimal securing using one tie-down lashing can be achieved for several cargo units at once using large lashing rails (angled rails).