"The dangers of disarmament"


One of the upshots of political developments in Europe has been a gradual reduction in the amount of military hardware. And Hungary is no exception. The following pictures show Russian-made ballistic missiles on their way to being decommissioned. And it is, of course, a welcome development. 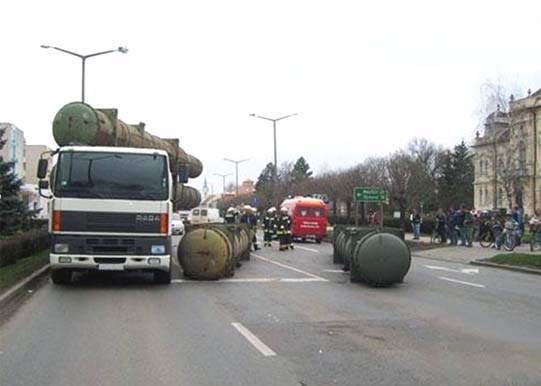 Of course, the missiles were no longer dangerous, at least not in the way they had originally been designed to be. The dangerous thing about these missiles, or rather the missile containers, is that they were not adequately secured on the vehicle and parted company with the platform trailer while they were being transported through Budapest. We were unable to establish whether these containers were fitted with locking facilities, such as those available on ISO containers. Be that as it may, the containers were secured neither to each other nor to the vehicle. That’s the only plausible explanation for the fact that two missile containers were able to fall from the trailer and the remaining two shifted dramatically.

Since we have merely been given permission to publish these pictures by the Budapest Fire Department and no detailed information has been forthcoming, the suggestions we make below must rely solely on assumptions. 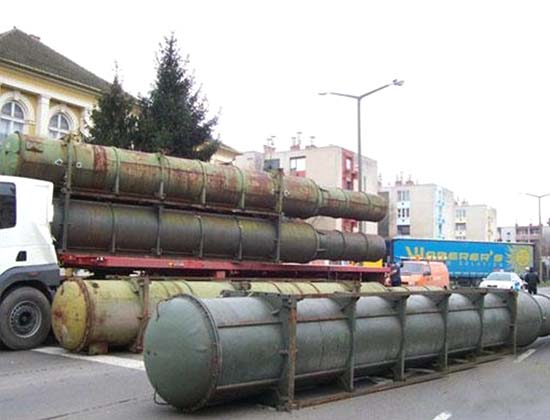 The articulated truck must have been turning right or taking avoiding action and must have braked during this maneuver. This is the only explanation for the fact that the entire load has shifted forwards into the cab and two of the containers have dropped onto the road to the left. The driver can count himself lucky that the speed he seems to have been travelling in the city was low enough and the braking gentle enough for him to have avoided being injured. The "only" damage was that the rear of his cab was badly bent. 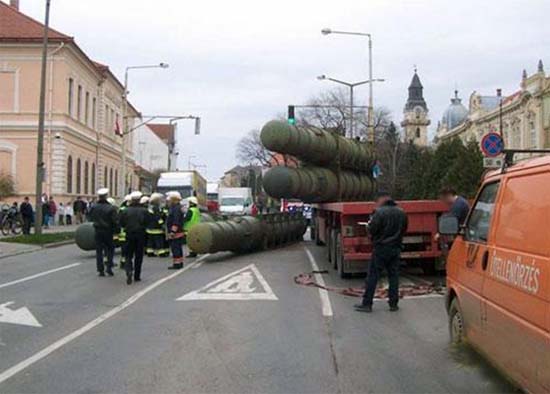 Without wishing to upset those responsible for loading and transporting these containers, it nevertheless appears to us that they didn’t for one moment think about securing the load. It seems that the missile containers were not just loaded onto the trailer unsecured, but that they weren’t even secured to each other.

It is perfectly possible to secure loads such as this without difficulty even on a platform trailer without an end wall. If we assume a total weight of 24 tonnes, each missile container would have a maximum weight of 6 tonnes. For the purposes of calculating the load securing measures needed, it is assumed that the individual containers can be secured together tightly with no gaps. A coefficient of friction µ = 0.1 (steel on textured coated board) is assumed for the proposed securing method. A securing force of 9,600 daN is necessary to the sides and to the rear. 3 loop lashings are required on each side to achieve this. A total of 5 loop lashings would have to be used against the direction of movement (in the direction of travel), as a total of 16,800 daN securing force is required. It would be sufficient if the bottom container alone were secured to the front and rear, thus keeping the angles as shallow as possible and maximizing the securing effect. The following measures could be employed to reduce the amount of securing material from 14 belts:

Assuming a coefficient of friction µ = 0.5, only 2 loop lashings would be needed on each side and the lashings to the rear could be omitted, as the side lashings meet the minimum securing requirements (in this case, they would be a mixture of loop lashings and tie-down lashings). Depending on the load-bearing capacity of the end wall, at least 1 and up to 3 loop lashings would be required to secure the load to the front. 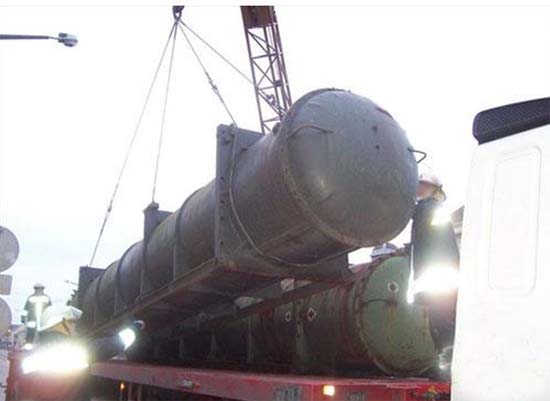 We can only hope that the containers were secured adequately using loop lashings and possibly friction-enhancing materials after they were loaded onto the trailer again. If not, transporting this load would still have been a risky business and the missiles would have remained dangerous weapons.