Five wheels on my wagon 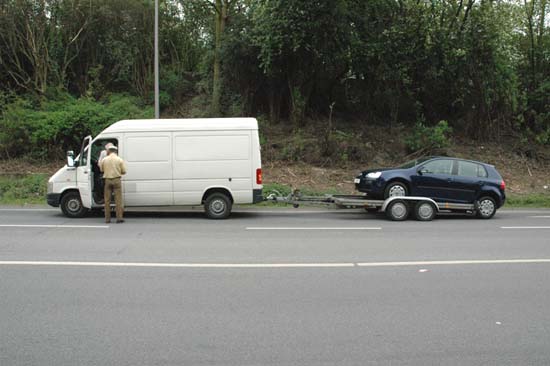 The car behind the transporter was originally standing properly on the trailer. The dynamic influences arising during the course of the transport gradually caused the car to part company with the trailer. "Fortunately", the parking brake had not been applied to the rear wheels. You can imagine it a bit like an aircraft landing. To start with, the wheels are motionless and free to roll. Suddenly they make contact with the road surface; the tires squeal a little and in no time the wheels are up to the same speed as those of the trailer. Because the car was secured, it trundled along behind on two of its own wheels. No problem! 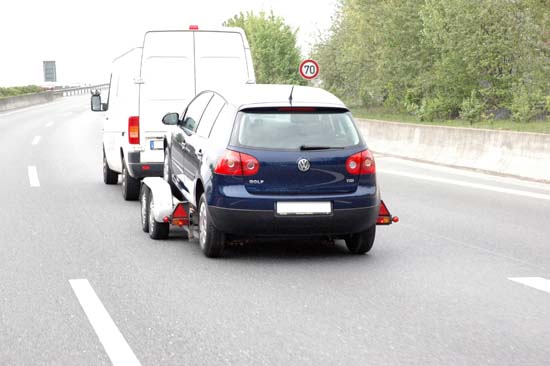 The driver of the transporter was not unduly disturbed by this "routine" event. When the officers that stopped the transporter found fault with the way in which the car was being transported, the driver wanted to simply winch the fugitive car back on board. That’s where the officers stepped in and organized a crane to re-load the vehicle properly.

Ultimately, the load securing measures, which comprised two lashing belts, did their job. These belts were attached to each side of the trailer, taken round the rear axle and attached to the trailer again. A simple load securing columnist cannot quite comprehend why the belts had enough slack to allow the car to roll off the back of the loading area. But it is assumed that the belts were actually intended to prevent the vehicle from rolling forward off the trailer. Like the parking brake, the winch had sadly also not been used. Even though it would not on its own have been an adequate load securing measure, it may still have prevented the car from being inadvertently transported on its own wheels.

There is a lot that can be said about the correct way of securing this load. There is even a dedicated VDI Guideline, although this is generally only applied to professional car carriers. It is only on such vehicles that wheel chocks can be inserted flexibly in the oblong holes of the loading areas, thus allowing the effective use of three-point belts.


The following advice can be given for normal transportation: