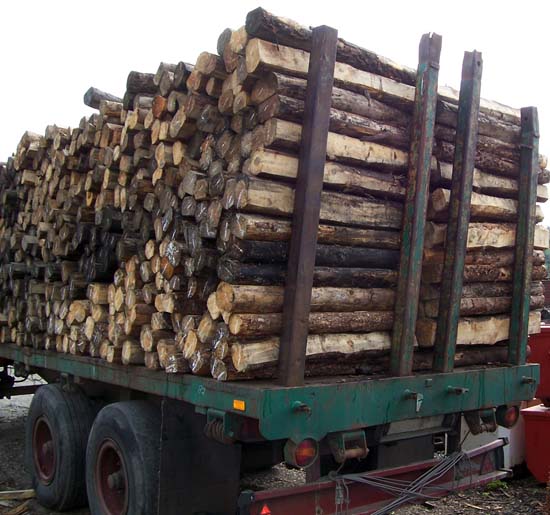 Looking at figure 1, you may first be tempted to ask what kind of lumber is loaded on the rather poor quality trailer. It doesn’t appear to be roundwood, since most of the logs at least have been trimmed on both sides and only a few have the same appearance as roundwood. The loading method is chaotic (the lumber is neither stacked nor bundled), so the loading method is closer to that used for transporting roundwood. It is uncertain whether or not a saddle effect is generated as with roundwood (and hence a deduction can be applied) or whether the coefficient of friction of cut lumber to cut lumber should be taken.

If we refer to the "Loading recommendations for transversely loaded roundwood" (available in German only) that give details on securing such loads for road transport, we see that two tapered or squared strips are to be placed on the loading area. These tapered or squared strips are designed to enable tight-fit securing of the load to the side. In addition, the recommendations state that the lumber is to be loaded in such a way that both ends of the logs are placed on the strips. Consequently, this description refers to 2 – 2.5 meter roundwood, and not to approx. 1 meter cut lumber.

If we then take a look at the recommendation with respect to load securing (two belts laid across the length of the load and tightened by hand to avoid the negative effects of vertical jolts and which act primarily in the vicinity of the stanchions), this figure would suggest that the load securing has not quite been completed. It can be clearly seen that the operator of this vehicle has at least two securing devices ready for securing the load – whenever that may be. These are the two capstans at each side of the rear of the vehicle. For reasons of cost-efficiency and ease of working, the wire cable was not wound onto the drums (which would undoubtedly not have accommodated this cable), but were wrapped around the vehicle fender in a figure-of-eight. So far so good. 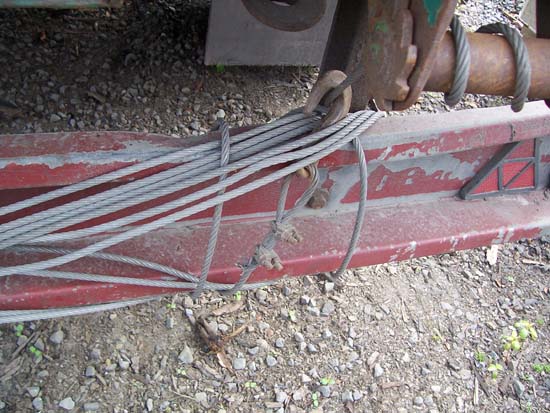 If we ignore the fact that these capstans have no recoil prevention (as demanded by the German vehicle operators‘ trade association), an observer with that turn of mind would notice that the cables are secured with wire cable clips. If we also ignore that fact that the vehicle operators‘ trade association does not permit such wire cable connectors for vehicles used on the road (such securing methods only being permitted for maritime transport), it should nevertheless be noted that there are exactly two cable clips too few and that those that are fitted are fitted the wrong way round. You can look up the correct way of doing this at www.containerhandbuch.de, section 4.4.1. 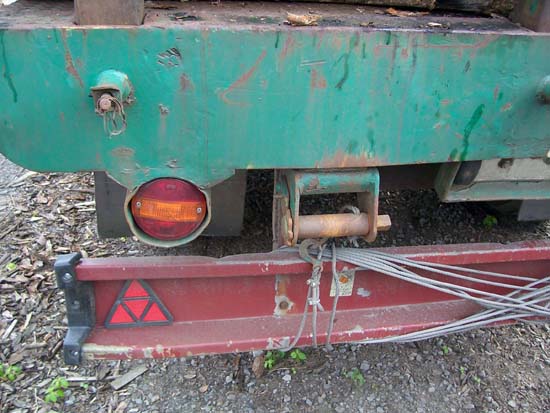 A quick look at the left of the vehicle shows that the same care has been taken here. The extent to which the cable has been secured to the shaft of the capstan remains a little uncertain. Looking at the connectors at the end of the cable, we find that the clips have been attached correctly. Unfortunately, two are missing here also. 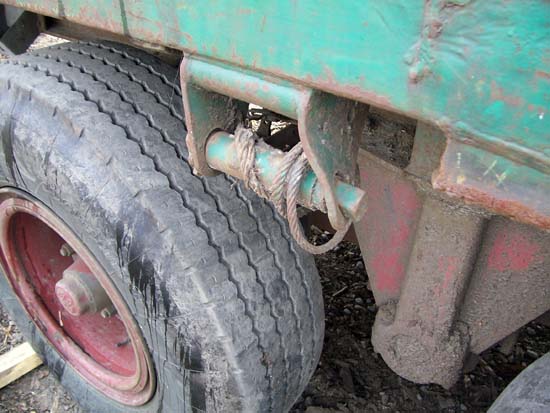 A look at the steel cable capstan on the side of the vehicle provides further evidence of the "high safety standards" of the vehicle. The wire cable actually appears to be attached to the shaft with a sort of splice. The overall condition of the capstan, particularly of the right-hand shaft mounting would appear to suggest that issues of safety have not been addressed as rigorously as they might have been. 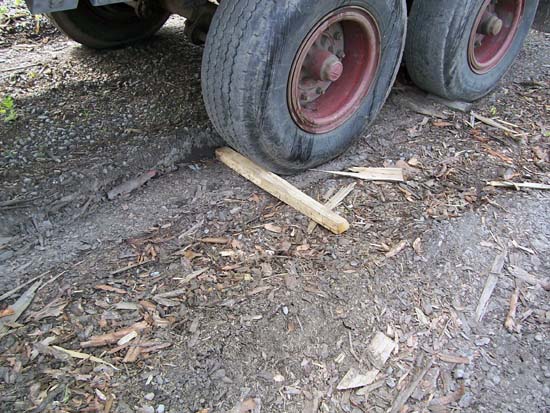 But the rather murky overall impression of the safety of the vehicle takes on a somewhat brighter aspect with this picture. It is plain to see that the person responsible for loading has a keen interest in safety and has taken long-term measures to prevent the vehicle from rolling away. 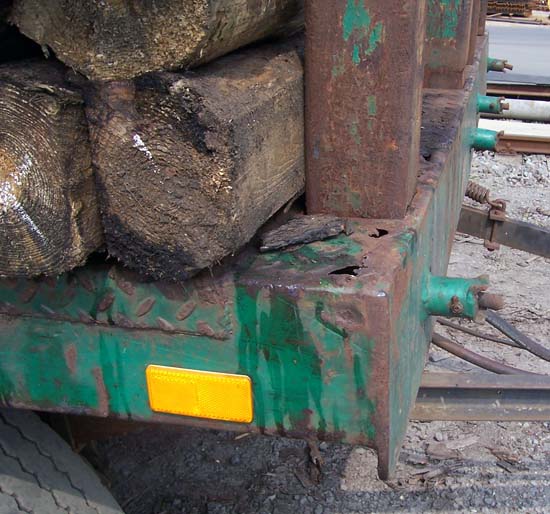 Looking at Figure 6 through the eyes of a simple load securing columnist, you can’t fail to notice the corrosion problems at the front of the loading area. Of course, it would take a vehicle manufacturer to assess whether these undoubtedly purely partial corrosion holes on the loading area could actually result in stability problems in the vicinity of the stanchions. And yet it remains a fact that holes such as these in loading areas are the exception rather than the rule and that they do not leave a particularly good impression.

To take this load securing problem a little more seriously, we should consider the best way of securing logs like this.

According to the "Loading recommendations for transversely loaded roundwood" (available in German only), each log must be placed on two tapered strips laid along the length of the vehicle. Since this vehicle is transporting logs trimmed on two sides, approximately 1 meter in length, four tapered strips should be used along the length of the vehicle. If, however, the lumber is to be secured without this tight fit to the tapered strips, the coefficient of friction between the metal loading area (textured sheet) and wood is to be used for load securing purposes. This coefficient of friction µ will lie between 0.3 and 0.4. If we have no firm evidence to the contrary, we must assume a coefficient µ of 0.3 to be on the safe side. Since no effective pretensioning forces can be applied to the entire stack by the cables or belts passed lengthwise over the load (as has been demonstrated in various trials), the entire load must be prevented from slipping sideways by constructional measures or other load securing materials such as nets or tarpaulins.

If the load is to be secured as described in the "Loading recommendations for transversely loaded roundwood" (available in German only) (even though cut lengths of approx. 1 meter were not the subject of the trials that were carried out preliminary to this recommendation), this vehicle requires four tapered or squared strips laid along the length of the vehicle that are suitable for securing the lumber as a tight fit. Furthermore, two load securing belts must be passed over the length of each stack and tensioned by hand. As of 1st October 2007, the vehicle will require load securing systems at the side to prevent lumber stacked in gaps from leaving the vehicle.