"Freedom for the rolls"

"The load-securing community lives in fear of the insatiable desire of paper rolls for freedom. Totally unexpectedly and for no explicable reason, these malignant things start to move with homicidal designs on the driver."

Such must have been the thoughts of the loading staff and drivers who loaded rolls of this type in this way when they saw these pictures. 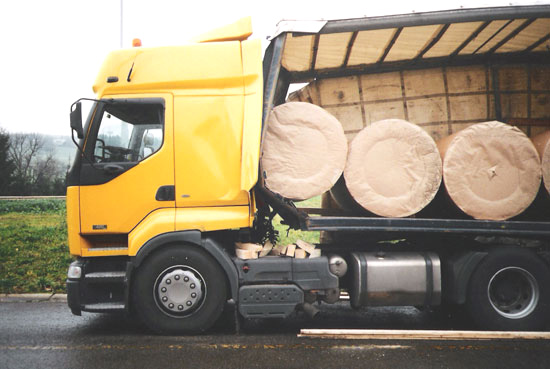 Loads must be secured with 80 % of their own weight towards the front. Generally, it goes without saying that friction is a component of the load-securing equation. This means that depending on the paper and the loading surface, it is possible to subtract 20-30 % from the 80 % load securing requirement to the front to account for friction. And then the tight fit to the front (the end wall) is usually taken into account. Normally, 5,000 daN of securing force can be taken as a usable value for an end wall.

Which means: 80% minus 30% leaves 50% of the weight of the load to be secured. For a load of 24,000 kg, this leaves 12,000 kg (or more precisely 12,000 daN, since we are talking about forces here) still to be secured. The end wall accounts for 5,000 daN, which leaves 7,000 daN for the load securing mechanisms. When transporting paper, trailers with stronger end walls are also used, and this will have to be verified on a case-by-case basis. If friction-enhancing materials are placed under the paper, the effort required for load securing can be reduced still further.

So back to our perfidious rolls.
By nature, rolls roll and exhibit minimal friction in the process (around one 50th of their inertial force). Which in two words means: No friction. The load rolls, and when the vehicle brakes, it accelerates unchecked (without friction) against the end wall. The rolls were only "secured" to the rear with wooden wedges, presumably to prevent them from immediately landing on the toes of the gentlemen who loaded them. No securing measures were taken towards the front, which meant that the poor end wall had to withstand the weight of the entire load (24,000 x 80 %). This it failed to do. The kinetic energy of the rolls was converted to deformation energy, which caused the end wall to buckle badly.

The driver must have been very grateful to the end wall. 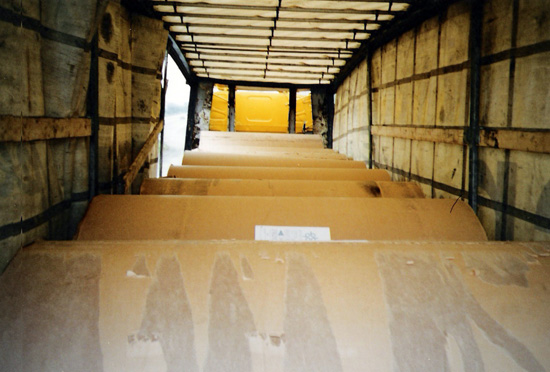