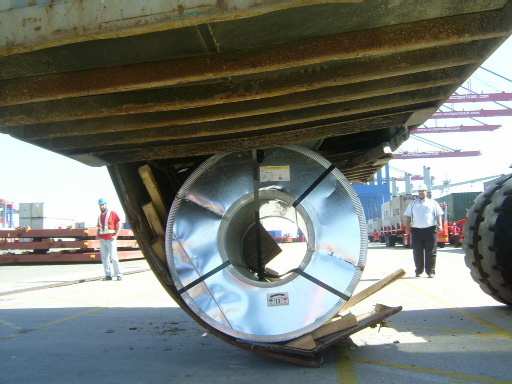 "A new way of stripping a container?"

Genuine practitioners would be alarmed to see a standard 20′ container used to transport heavy coils. A coil can be counted as being heavy in this context if it exceeds the line load of the container (see section 4.2.1.3 Stowage planning in the Container Handbook). If a container has a payload of 28,000 kg, the line load for this container is 7,000 kg per meter according to the rule of thumb. This rough calculation does not take the lateral load distribution into account.

Therefore, if heavy coils are to be loaded, an experienced practitioner would prefer to use a suitable container, preferably a flat with a coil well, or at least a flat, since these generally have a higher line load and their side rails facilitate the work of distributing the load. We have dealt with this topic in detail in the Container Handbook (see 5.2.14.2 Coils on containers and, for details on load distribution on flats, 5.2.14.13 Slabs – load distribution on flatracks).

Sadly, the economic considerations requiring everything to be "lean", uncomplicated and hence inexpensive conflict ever more frequently with the need to make loading as simple and safe as possible. And it is this that leads to coils weighing 10 tonnes or 20 tonnes simply being loaded into a standard 20′ container. Just place a little wood underneath (with a little luck, the coil may, perhaps, have been placed in the middle of the container), a tie-down lashing over the top (which is utterly useless as a load securing measure), and a piece of wood nailed underneath the left and right of the coil to stop it moving. Close the doors quickly so that nobody sees the catastrophe and get the load moving. The result can be admired in the picture above.

And yet, in the world of transportation, virtually nothing is impossible, and even though coils are actually unsuitable for being transported in 20′ containers, it is nevertheless possible to make them suitable to a certain degree. Since the damage caused by coils which have broken loose in containers has been on the increase in the past, Professor Kaps has investigated the topic of load distribution and the securing of a wide range of different coil types (Loading and Transport of Steel Coils in ISO Containers). His 30-page treatment in the Container Handbook illustrates all the issues that need to be dealt with before approaching this difficult topic. Whatever else, it is clear that transporting coils in a standard container is not a cheap option.

Anyone wanting to transport coils in a standard container must have a grasp of the complex interrelationships and take these into account during loading. Anyone failing to do so endangers human life in the ports, in the packing stations, on the roads and at sea. On container ships, such containers are stowed on deck and below deck. If a coil as badly secured as the one shown above breaks loose and breaks through the container wall, it is possible for it to fall to the double bottom from the sixth or eighth layer (18 to 20 meters high). This is where the ship’s fuel is located. Whoever loaded the container or bears responsibility for loading the container will be liable for any damages.