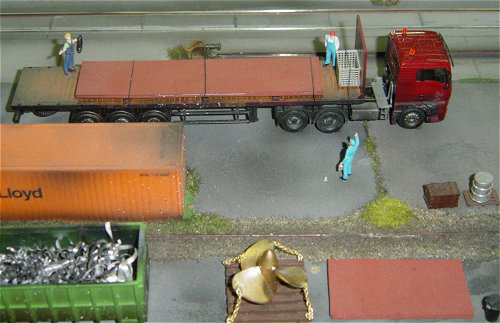 This steel loading scenario was seen at the Miniatur-Wunderland model world in Hamburg. Our diminutive colleagues are in the process of securing steel sheet on a semitrailer. 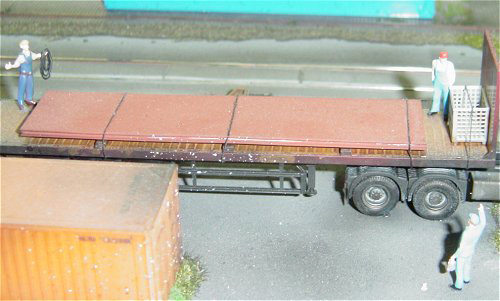 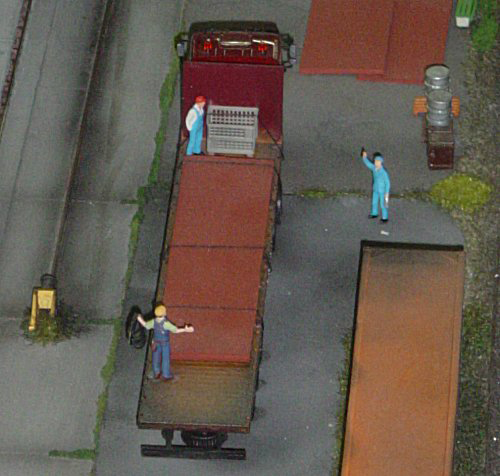 Figures 2 and 3 show that the load securing relies on friction and tie-downs. Three tie-downs have already been attached and a fourth is being prepared.

What is being illustrated in the models can be seen day in, day out in loading bays throughout the world. The following worked calculation shows that a lot more than four tie-downs are required to secure a load of this type.

Calculation of the load securing required in the longitudinal direction (direction of travel) if tie-downs are used:


The effort involved in this case can be reduced considerably by using a different securing method.

To start with, nonslip intermediate layers or a combination of square lumber dunnage and nonslip materials can be used to increase the friction. Also, direct securing of the load with loop lashings (V lashings) is also to be recommended – see Figure 4.

Calculation of the load securing required in the longitudinal direction when using loop lashings:

It is assumed that nonslip materials are used, giving a friction coefficient µ = 0.5. Lashing belts with a lashing capacity (LC) of 2,500 daN are used to secure the load. The load securing points of the vehicle have an LC of 2,000 daN. The smaller value must be used for calculation.

Information and suggestions on the safe transportation of metal sheets can be found on pages 212 through 226 of the GDV Cargo Securing Manual.