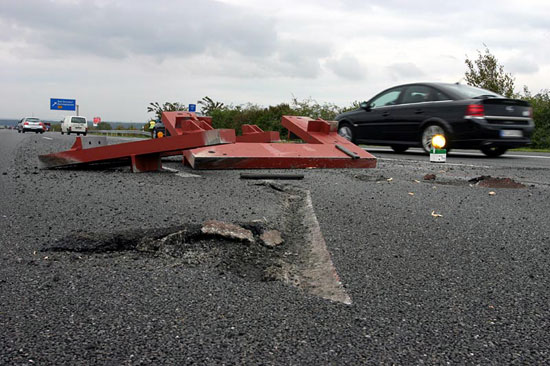 Ploughing up the highway!

In consequence of a driving error, a low loader lost machine parts and steel sheet weighing several tonnes. When the police arrived on the scene, they were confronted with chaos: Solid iron parts weighing around 2.8 tonnes were scattered over the left and center lanes. Long steel plates were scattered over the asphalt for a distance of several hundred meters. In several places, the asphalt was furrowed for several meters to a depth of a few centimeters where the parts of the load had first made contact. 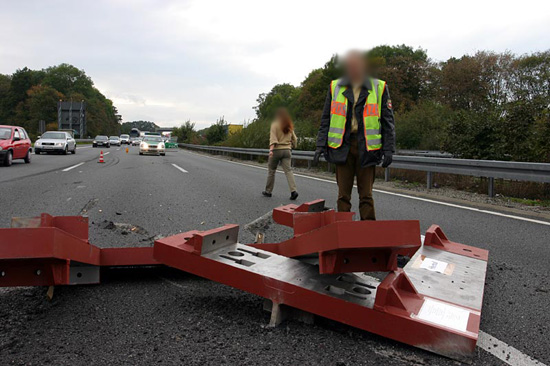 Nobody was injured and nobody else was involved in the incident, as all the drivers following the truck were able to brake in time despite the hill. According to the police, any car colliding with one of the heavy machine parts would probably have rolled over and at worst would have been catapulted into the oncoming traffic.

Unfortunately, no details are available to us, so this statement can be based only on assumptions and conjecture.

The description speaks of a driving error, a sharp steering maneuver possibly to correct the direction of the vehicle, and not an accident. According to the VDI guidelines, the load securing measures must be sufficient to cope with the demands resulting from such activities. A look at the loading area suggests that the steel parts were not lashed down sufficiently. It would appear that there was no tight fit (e.g. against the stanchions). Friction-enhancing materials (other than the pallets) were not used. Lateral acceleration forces were generated during the steering maneuver. The tie-down lashings did not provide sufficient securing force, with the result that the load was able to move. 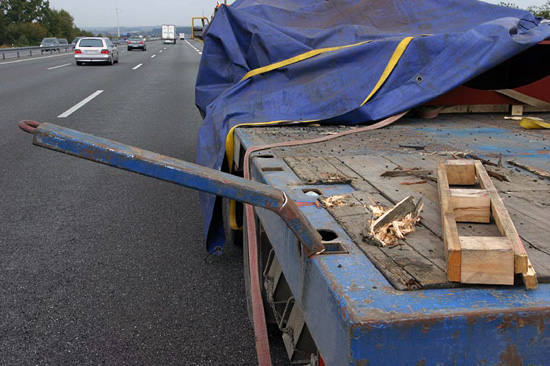 Loads must be secured in such a way that they cannot move!

This can be achieved by increasing the friction, establishing a tight fit and using loop lashings. A sensible combination of these options will probably always be the most cost-efficient solution.

The figures below show the possibilities for using loop lashings. Unlike a tie-down lashing, a loop lashing always exploits the full capacity of the lashing material. With a tie-down lashing, the securing effect (prestressing) has to be applied by hand. This may be sensible for relatively light loads with a high friction coefficient, as friction forces work in all directions, but with structural steel parts, the lashing capacity of the securing material should be used intelligently in the form of direct securing. 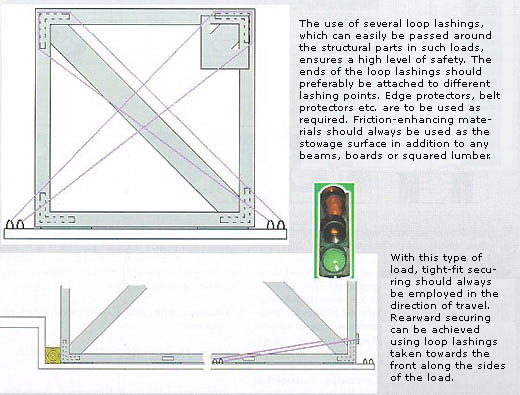