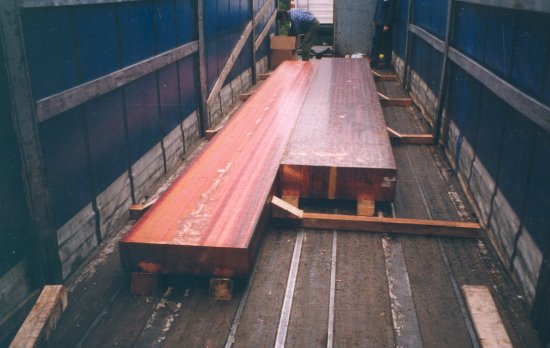 Figure 1: View towards the rear of the vehicle

Two "heavies" pulled out of circulation just in time!

The figures show a semitrailer (a curtainsider) loaded with semi-finished copper cakes. The police came across the vehicle during a truck inspection.

Load securing of the two cakes totaling some 24 tonnes can only be described as extremely deficient. We don’t have any detailed information available, but the pictures alone allow some clear conclusions to be drawn with respect to the suitability of the vehicle and the load securing measures. 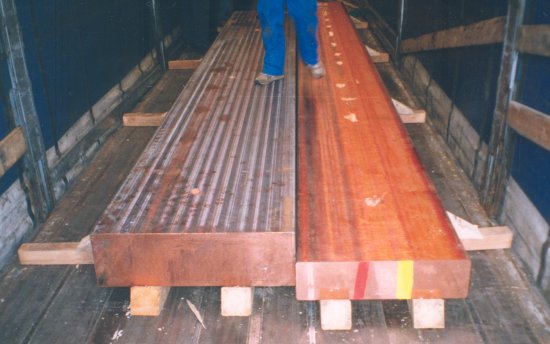 It can be seen that the cakes are loaded on dunnage. The cake on the left in the direction of travel weighs around 13 tonnes, and the one on the right around 11 tonnes. Wedges were used to brace or "secure" the load. 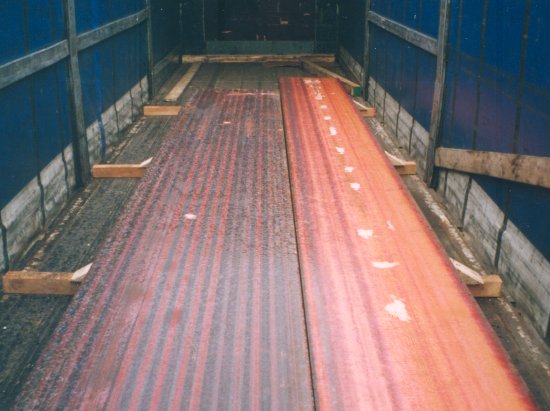 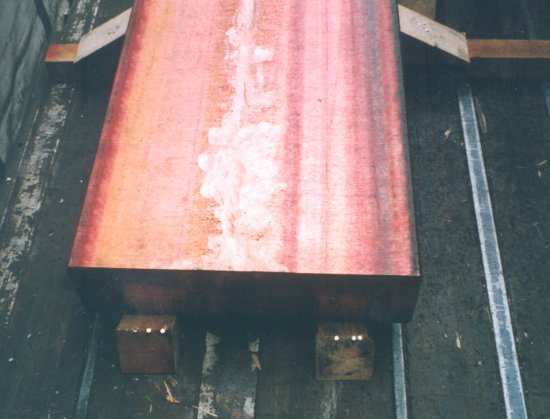 Longitudinally, i.e. to the front and rear, two wedges were fitted per cake. These were attached to the floor (30 mm thick) with three nails each. The wedges are mounted incorrectly. In addition, the nails have been driven into the point of the wedge, so that the nails do not penetrate the vehicle floor sufficiently, which is too thin anyway. The securing effect can be assumed to be extremely small (cf. Figure 5).

At each side, four wedges are mounted with three nails each. There is a gap between some of these wedges and the load. The nails have been driven in along the grain, with the result that the wood has split to some extent. The wedges are attached to the dunnage, and it is unlikely that these nails penetrate the vehicle floor (cf. Figure 6). Furthermore, the dunnage itself is not attached to the vehicle floor. Thus, it is only the friction between the wooden dunnage and the vehicle floor that provides any lateral load securing. This means that the two cakes are resting on wooden runners, just waiting for the next significant lateral acceleration force to slip from the loading area. The following calculations will show that the load is just as liable to slip forwards as a result of the deficient load securing. 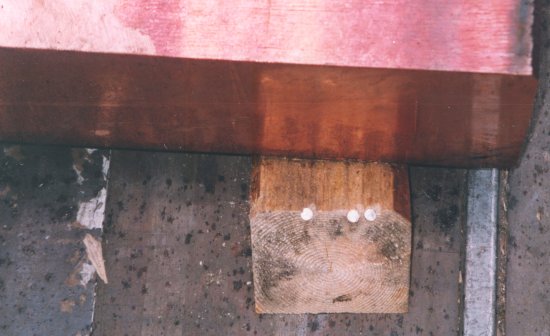 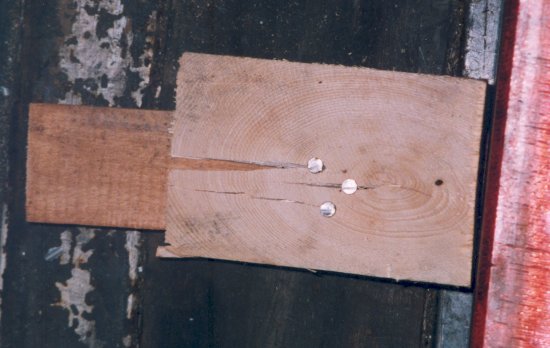 Analysis of the securing in place:

As a general principle, it should be noted that this semitrailer is utterly unsuitable for tight-fit securing using bracing.

The following information should indicate how wooden wedges are used correctly

Crate wedges should be attached as shown in figure 7. For each wedge, at least three nails are necessary, one tension nail and two to hold the wedge in place. The tension nails have the task of pulling the wedges tight into the load. The holding nails take up the load and are driven in vertically or at a slight angle to the direction of loading. Shear strength and extraction resistance are influenced by the penetration into the underlying surface, the angle at which the nail is driven in, and the properties of the nail surface. The shear strength and extraction resistance of a nail, 5 mm thick, that is driven in vertically and which penetrates through 50 mm of the grain side of a piece of wood, and is driven in to a depth of 40 mm can be expected to be around 400 daN. The critical factor is that the grain side of the wood is used to take the nails (cf. Figures 8 and 9). Nailing into the grain can cause the wood to split during nailing and experience shows that this only results in around half the extraction resistance of a nail driven into the grain side.

With heavy loads, nailed load securing methods should not be the only means of securing used; too many factors impact precise calculation of the holding force of a nail:

Conclusion: For this type of load, vehicles with stanchions, strengthened headboard and/or adequately dimensioned lashing points should be used. In this way, the load can be secured efficiently and quickly with the aid of nonslip material and by filling gaps with wood or by using loop lashings.

Vehicles with adequately dimensioned lashing points and/or standardized end and side walls permit the use of a number of different load securing techniques which are simple to implement. The following illustrations are only intended to give an insight into the load securing methods which can be considered. We shall not discuss whether the load should be stacked or stowed side by side.

Care should be taken to ensure that the dunnage is wider than it is high. Dunnage that is higher than it is wide encourages a tendency to tip and square dunnage tends to roll. In addition, dunnage should be combined with nonslip materials (cf. Figure 10).

Figure 10: Use of dunnage combined with nonslip material


When nonslip material is used with heavy loads, physical changes may occur in the material which have a negative impact on their coefficient of friction. For this reason, a coefficient of friction of µ=0.5 is assumed below where nonslip mats are used.
Load distribution considerations forbid tight-fit loading against the headboard of the vehicle. Against this background, the following calculations were made for securing with "loop lashings (V lashings)" and "wooden bracing against the headboard".

Sketches for the calculations described above:

Figure 11: Sketch of longitudinal securing using loop lashings (view from above) – cf. calculation I.a). The dunnage should not extend for the full width of the cakes to allow the lashings to pass under the cakes. Edge protectors should be used with the lashings. This securing method can also be used with stacked loads. Loads stowed side by side require gaps to make it easier to subsequently unload the cargo (slinging with chains or belts). These gaps should be filled with squared lumber.

Figure 12: Sketch of lateral securing using loop lashings (view from above) – cf. calculation II.a). Edge protectors should be used with the lashings. This securing method can also be used with stacked loads. Gaps between the load items should be filled with squared lumber.

Figure 13: Sketch of longitudinal securing by means of bracing against a load-bearing headboard (side view) – cf. calculation I.b.). Bracing comprising crosspieces, supports and locking battens distribute the load evenly across the headboard. This securing method can also be used with loads stowed side by side.

Figure 14: Sketch of lateral securing by means of bracing against a load-bearing side stanchions (view from rear) – cf. calculation II.b.). This securing method can also be used with loads stowed side by side.

Figure 15: Sketch of longitudinal securing using a combination of bracing against load-bearing side stanchions and loop lashings (view from above)