The Werneck intersection. An articulated truck loaded with 24 t of chipboard was traveling along the A70 highway towards the A7. It was raining. The truck was carrying two packages of chipboard. The packages were around 2.30 m wide. It’s no longer possible to tell whether the load was loaded as a tight fit or not. Each package of chipboard was secured with two lashing belts with standard load ratchets with a lash capacity (LC) of 2500/5000. 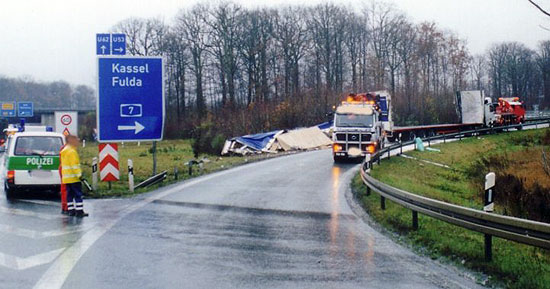 The "sudden" turn had an effect on the load. It set centrifugal forces loose. The load securing measures – two tie-down lashings for each package of chipboard – were both unsuitable and inadequate. The centrifugal forces caused the load to slide to the left, and as a result the truck tipped over.

The accident resulted in a complete write-off of the trailer and considerable damage to the truck tractor. The driver escaped with injuries.

The best way of securing loads of this type is as a tight fit. If this is not possible, direct securing in the form of loop lashing should be used. Tie-downs are unsuitable, particularly for stacked boards, since it is not possible to use friction-enahncing materials sensibly.