The pictures you can see here come from two different trucks traveling in convoy and which had secured their loads in an identical fashion. The difference: One vehicle was forced carry out an emergency stop and the other wasn’t. This makes it possible to show you pictures approximating to a "before and after" scenario ….

Once upon a time, there was a truck driver, who was supposed to transport slit strip (eye to the sky) on the loading area of his articulated truck. Because he had presumably had to deal with the issue of "load securing" on many occasions beforehand, he secured his load in the same way using belts as he always did. 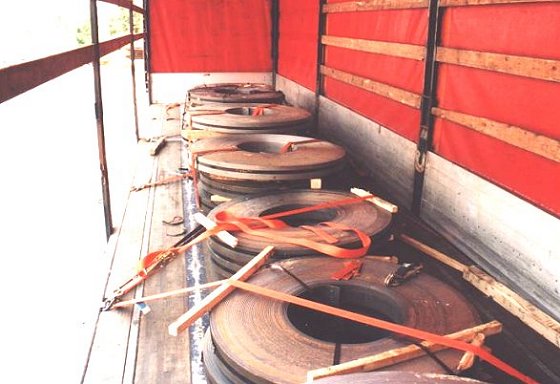 
And since his colleagues had once told him that the angle of the belt should not be small (less than 35°) he increased the lashing angle using squared lumber with some of the coils. 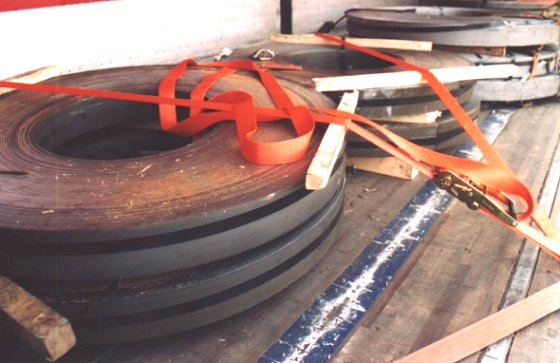 To make sure that the angle really was big enough, he placed lumber on the edge of load. And what of the other coils? He secured with his new self-tightening Gordian knot – an idea he had dreamed up during long, sleepless nights. 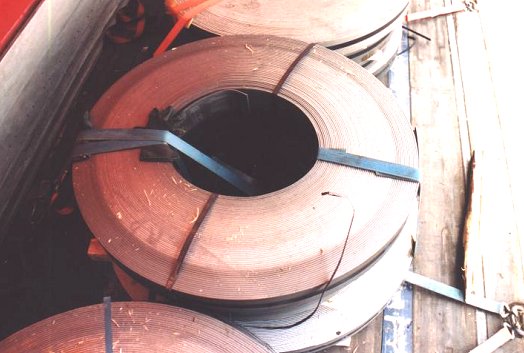 To unravel the logic of the "knot", we’ve drawn a diagram explaining it in detail. Special attention is to be paid to path of the belt!

Since every lashing point, for example, when the lashing exerts a forward load, is assumed to require a counterpart (a second lashing exerting a rearward load and thus balancing the forces) he sometimes attached two belts pulling in opposite directions to a single lashing point as can be clearly seen in the picture.

Any belts that were too long he simply shortened by tying a knot (1), and where the belts were too short, he tied two together with another knot (2). 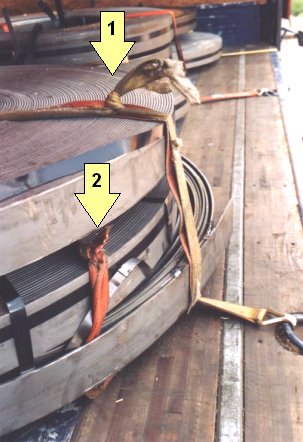 Here you can see these two magnificent knots in detail; but for copyright and other more practical reasons, we recommend that you do not try this at home. 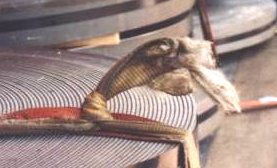 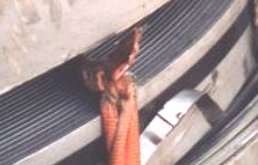 Now he had "secured" his entire load, he was ready to set off on his long journey in his articulated truck.

As always, he dreamed the day away driving up hill and down dale, from traffic jam to traffic jam, through winding valleys and over high mountain passes enjoying the spectacular scenery going past.

But suddenly, not far from Aschaffenburg in Bavaria, something quite extraordinary shook him from this idyllic existence. A truck ahead of him suddenly braked for no apparent reason. To avoid colliding with back of the other truck our driver had to abandon his daydreaming and, seeing as he was already too close to the vehicle in front, had to slam on the brakes to avoid an accident.

Just before the vehicle came to a standstill – our driver was already wiping the sweat from his brow in the belief that everything had turned out all right after all – he heard a strange rumbling and groaning from the loading area of his truck, followed by an almighty thump and a sudden silence.

He switched the engine off, pulled on the hand brake, opened the door and made his way to the trailer. On opening the door he saw, to his horror, that part of his load had disappeared. 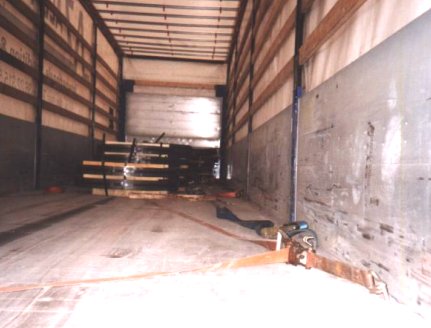 Only at the far end of the trailer could he just make out some of the coils that made up his beautifully secured load. And in front of him, nothing but empty belts.

"What happened? Where has my load gone?" he thought.

Once he had recovered from the initial shock, he returned to the driver’s cab. As he was alongside the gap between the cab and the front of the trailer he glanced to his right and, to his dismay, saw exactly what had happened to his missing load. 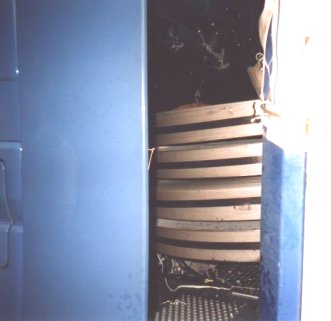 Mysterious forces at play during the emergency braking had pushed the load forward out of the lashing belts. The coils had crashed through the front aluminum wall and slid up against the rear wall of the cab which was also badly damaged.

Our poor driver surveyed the damage long and hard, and after some deliberation came to the conclusion that he had been extremely lucky. After all, the coils had not completely wrecked the cab, and he wasn’t hurt. And again, the coils had not fallen off the side of the truck which meant that no other road users had been hurt or even killed.

But he, and his boss, learned from their mistakes and immediately registered for a load securing training program in accordance with VDI 2700a. Now they both know how to secure a load correctly on the vehicle so that it remains firmly attached to the loading area regardless of the traffic situation. And the happy ending is that the vehicle will never again be damaged by slipping loads, and the load will always reach its customer in pristine condition.