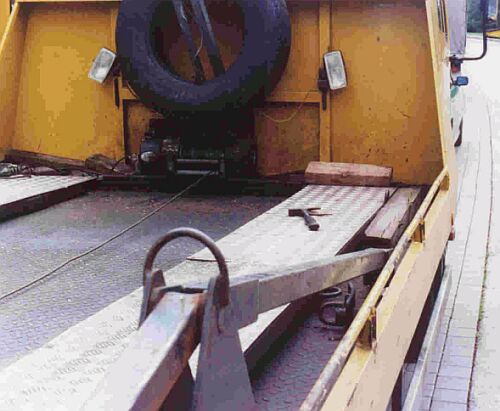 How does a hammer get on to the highway?

It is a source of never-ending amazement that day-in day-out radio stations throughout the country issue traffic warnings about metal objects, building materials, shovels and brooms, decorators‘ buckets and plastic buckets, tools and load securing materials, boards, beams, and wedges. But the question is – how do all these objects find their way onto the highway? Who suddenly decides, during a long drive, that they no longer need these things, and "dispose" of them on the highway?

This photo of the month sheds some light on the matter! The things listed above are usually not part of the actual load but which are needed to do the job and little or no attention is paid to them when securing the load. Once the actual load has been conscientiously secured, time pressure forces the drivers and loading staff to move on to new tasks. Little items of this nature only serve to hold up proceedings, and are often overlooked. But when you see a hammer lying around on the loading area like this, it makes you wonder whether the driver is really able to grasp the potential physical danger emanating from this hammer. 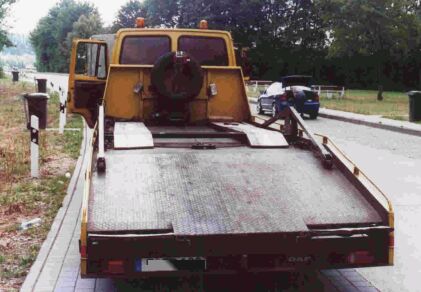 Just assume that the hammer falls from the loading area onto the road when the truck is negotiating a bend at a speed of 60 km/h. And then it rebounds and hits the windshield of an oncoming vehicle which is taking the same bend, also at a speed of 60 km/h. The collision speed between the windshield and the hammer will be just under 120 km/h. The kinetic energy of the hammer is sufficient to smash through windshield into the vehicle and, assuming it isn’t stopped by one of the unfortunate occupants, leave the vehicle again through the rear window.

In this particular instance, the driver of this pick-up truck was stopped when traveling on the highway at a speed of 110 km/h.

The result: The driver (who was also the owner) was charged for not securing the load and for exceeding the permitted speed limit.

He was lucky that that was all!