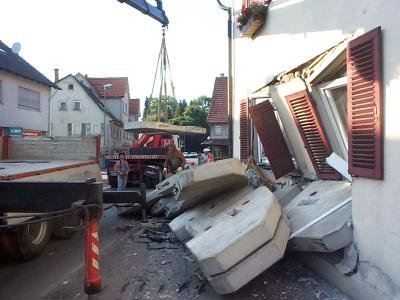 Dropping in for a visit:

A verbatim quote from a truck inspection: "But officer, these concrete blocks are so heavy, they couldn’t possibly move". The driver then jumped up onto the loading area and strained with all his might to move the uppermost crane counterweight. Officers faced with comments of this nature sometimes have difficulty remaining civil.

The quote above shows how difficult it is to get people to rethink. After all, the driver making the comment transports stacks of counterweights up and down the country, braking with disk brakes, and accelerating with some 350 bhp or even 450 bhp. But he’s quite happy to test whether his 25-ton load is well secured by applying his own strength.

The pictures clearly illustrate that the acceleration on a vehicle sets free far greater forces than a single human being is able to restrain.

The rule of thumb is: 50 percent of the weight of the load needs to be secured laterally and to the rear of the vehicle and 80 percent to the front. Friction can be deducted from these percentage values, but calculation is not a simple matter. There are many different values for all types of combinations of materials, all determined under optimum conditions. But what conditions apply to the loading area concerned?

Here’s another rule of thumb: In situations such as the one shown here, it is often the case that loading areas are not perfectly clean. Just a little sand on the driver’s shoes as they guide the weights into the correct position when lowering them onto the back of the truck can be all that is necessary to reduce the coefficient of sliding friction. When making sure that load-securing measures are effective, the effect of friction should not be overestimated. Many practitioners actually leave it out of the equation altogether and simply view it as an additional safety margin.

And now the proper way of securing the load: Direct lashings are the only method that should be considered. These should be dimensioned in such a way that they are able to take 50 percent of the weight of the load to the sides and to the rear. They must be capable of restraining 80 percent of the weight of the load to the front. This is best done by creating a tight fit to strong stanchions which can be inserted at different locations on the loading area. Thus, if a stack weighing 10 t is to be secured, you should first lay down the obligatory wooden beams. Then, pass two straps with a loading capacity of 5000 daN from each side to the other in a direct line (caution! You must ensure that the load securing points each have a loading capacity of 5000 daN and not the standard loading capacity of 2000 daN). Once the concrete blocks have been loaded, the straps are passed over the blocks to the other side fixed and tightened by hand. Not too much, just enough to ensure that in the event of a jolt the forces are not taken up by a loose strap. The same can be done toward the rear. If there are no stanchions available at the front, then direct lashing is the preferred method of securing.

So how well is the load secured now?

For example, at the sides: The 5000 daN strap is passed from the right to the left under the load, and then over the block back to the right hand side. It is then affixed to a second load securing point with a loading capacity of 5000 daN. This strap alone provides a securing force of two times 5000 daN, making 10 000 daN. With loop lashings, the angle between the snds of the strap is generally between 40 and 60°. This means that the maximum securing force of a strap is dependent on the angle and may be reduced to, for example, (cos 40°/2) 94% or (cos 60°/2) 87% and even to (cos 90°/2) 71% in extreme circumstances. In the case described here, this means that the securing force of the strap could be reduced to 71% or 7100 daN in a worst-case scenario. (Further detailed information is available in German under Truck inspections). A securing force to the sides which is more than sufficient. When using straps to secure toward the front, it is possible to select better angles, for example, at 60° a securing force of 87 (8700 daN) can easily be achieved with just two straps. More than sufficient.
Generally the same vehicles are used for transporting cranes. It is thus possible to employ the right types of stanchions and securing points which enables the driver to reduce amount of effort required to secure the load, without even taking friction into account. The key issues are: Load securing points on the loading area in order to attach loop lashings to the front and to the rear, stanchions allow concrete elements to be secured directly, in front and behind the elements, or even through the center. Chains could also be used as an alternative. These tend to be less prone to wear and tear, particularly when used with concrete objects, but straps can also be protected appropriately. 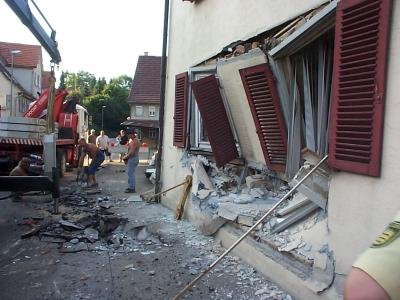 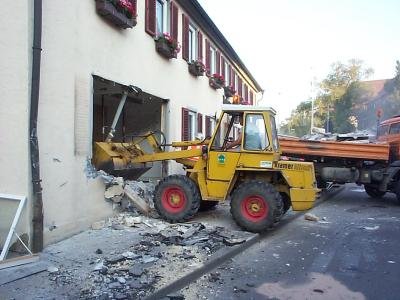 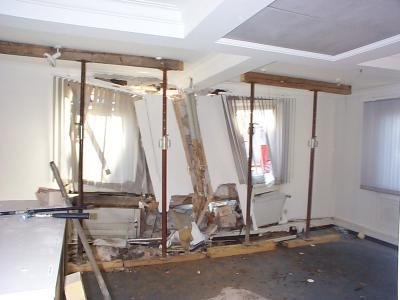