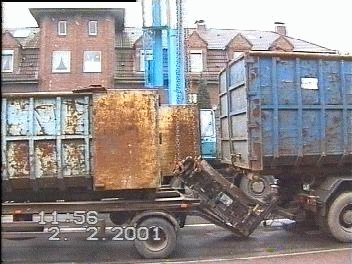 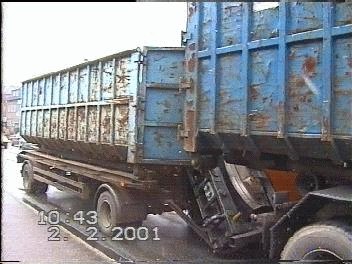 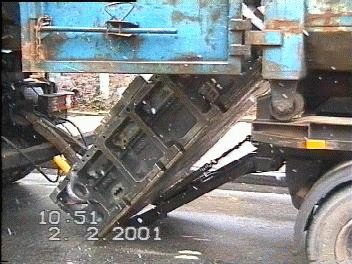 Machine parts on the move:

An truck and trailer combination was carrying two steel containers. The first contained steel scrap and the second contained two heavy machine parts one of 3 t and one of 6 t. According to the statement made by the driver, he was forced by a red traffic light to reduce speed from approximately 30 km/h. The container on the trailer was loaded in such a way that the doors were pointing forwards. 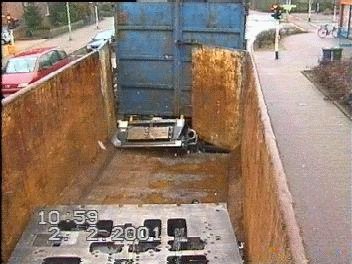 Load securing:
The two machine parts were being transported with no load securing whatsoever. The driver was not too happy about this state of affairs and, to give homself peace of mind, he attached a relatively loose chain in front of the container doors. At this point, no comment will be made about the load securing effect of this chain. 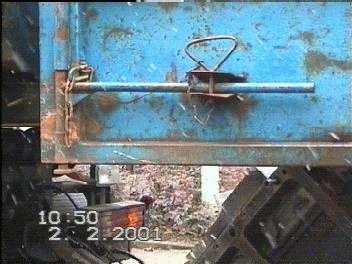 Depending on the condition of the loading area and the degree to which it was contaminated by oil, water, residue scrap or even snow (the weather was wintery), a coefficient of sliding friction of 20% of the weight of the load could be seen as high. To ensure good load securing in a case such as this, it is better to assume 10% friction.

Assessment of the vehicle:
The condition of the vehicle and the load securing options it afforded made it unsuitable for this type of transportation. A steel container of this type is basically suitable for transporting bulk cargoes that can be distributed over a large area and homogenously against the side and end walls. The machine parts were loaded with large gaps and no securing measures were taken. As a rough estimate of the securing requirements toward the front of the vehicle, the German VDI guidelines suggest securing forces in the region of 7200 daN for a loaded mass of 9t. If we assume a coefficient of sliding friction of 10%, this transport had a securing force shortfall in the region of 6300 daN. The large gaps made this disastrous lack of securing even more hazardous.

If parts of the load start to slide, the calculation of the necessary securing forces as described above, is no longer valid since the larger the loading area the longer the dynamic forces have to act relative to the loading area. In addition to this, sliding loads (regardless of whether they are sliding backwards, forwards or to the side) can affect the handling of the vehicle/trailer or semi-trailer to such an extent that the vehicle can no longer brake correctly and the weight shifts so badly that the vehicle tips or has another type of accident.

The forwarder, carrier, and shipper or driver are always reponsible for securing loads. When an expeditor uses a container vehicle that has no load securing measures, no load securing points, friction-enhancing mats or wood to create a tight-fit in order to transport loads of this kind, they must expect to be asked what exactly they thnk they are doing. He is partially reponsible for this transport. If the forwarder is offered a ’naked‘ container for a transport of this type, he should reject it, since he also carries responsibility for loading and securing the load. Finally, the driver is virtually always the one who takes the rap since he is the one responsible for ensuring that he vehicle is safe to drive, and also puts himself and others at risk. Furthermore, the driver is always the first point of contact if the police inspect the truck and the load securing.

In the example shown here, the damages amount to material damages "only", the settlement of these material damages and a traffic violation. The forwarder and shipper/driver involved can breathe a sigh of relief that nobody was hurt. If other road users had been hurt or even killed as a result of a lack of load securing, the courts would surely check who was responsible for what and who was in a position to ensure that defective load securing of this nature was avoided.