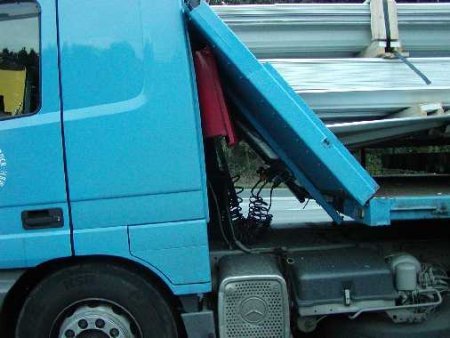 Sequence of events leading to the accident:

At the time of the accident, an automobile driver drove onto the A1 highway towards Bremen at the Unna-Massen junction. While still within the roadworks at the beginning of the acceleration lane, the driver moved straight out into the main carriageway and onwards into the central lane.

During this maneuver, the driver failed to notice the articulated truck driving along the central lane. The two vehicles collided.

The truck driver immediately braked hard, causing the load to slip forwards, bend the trailer headboard and come to a standstill just behind the rear wall of the driver’s cab. A crane had to be called in to recover the load (corrugated sheet metal). The accident meant that two lanes in the Bremen direction had to be closed for a short time.

The accident caused damage to a value of EUR 8,000 to the automobile and of EUR 40,000 to the truck. A traffic jam 4 km in length also formed while the police attended the accident.

The metal sheets were strapped together into cargo units with steel straps and had not been loaded tightly in either the forwards direction or sideways to the vehicle’s stanchions. The load had not been secured.

Hard braking caused the load to slip and the driver escaped injury only by chance. It is of only secondary importance to the assessment of load securing that, during the hard braking, the truck collided with the automobile in front, as the it was the braking which caused the load to shift.

Due to the gap between the load and the headboard, the load was able to build up considerable kinetic energy relative to the loading area (it slipped). When the load hit the headboard, this energy was converted into deforming or destructive energy, resulting in the considerable damage which can be seen. Even without the gap, it would have been more than questionable whether the headboard would have been able to withstand the load. The manufacturer can provide details of the securing force which a particular headboard can absorb. If it is constructed in accordance with EN 283, it will be able to provide a securing force of 5,000 daN against an evenly applied load at a height of 0.8 m.

Additional securing is absolutely essential in all directions (to the sides, to the rear and forwards). The high mass of the present load makes it advisable to use direct lashing. Of course, the belts will have to be protected from the sharp edges on the load. 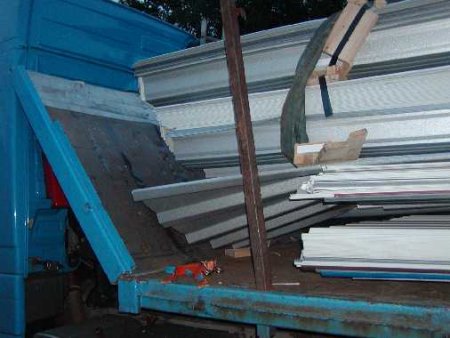 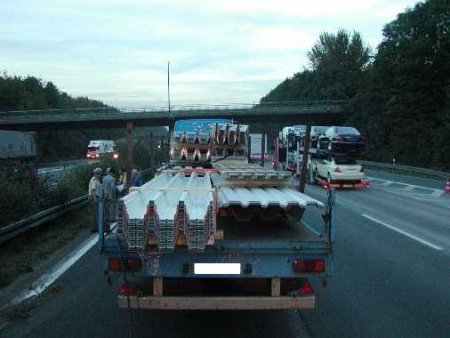 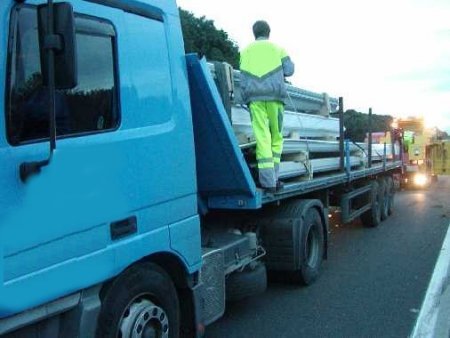