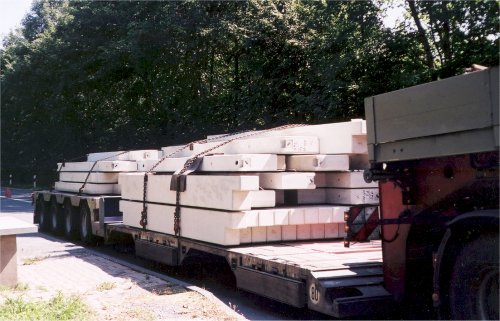 An articulated truck with a double drop deck trailer is carrying 40 metric tons of concrete components. 28 metric tons of the load have been loaded on the actual drop deck loading area, while 12 metric tons are on the back 4-axle unit. The load is "secured" in each case by 2 chains providing tie-down lashing.

The vehicle is entirely unsuitable for carrying this load. This shortcoming could have been overcome by taking considerable effort with load securing and using a different loading arrangement. Load securing is ineffective due to the gaps in the load. There is a shortfall in securing forces of well in excess of 10,000 daN (approx. 10 metric tons) solely in the large load block on the main loading area. 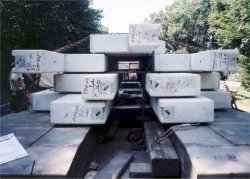 Figure 2 is a view of the trailer from the rear. The large gaps between the individual concrete components are clearly visible. The components have been piled up in such a way that the top one could be laid on top like a lid. Tie-down lashings increase friction and generate pressure on the loading area. This securing force acts obliquely or diagonally inwards on each of the top outside corners of the load. The load is thus pressed inwards and, on exposure to bumps and vibration (which reduce the friction), the concrete components shift slowly inwards into the gaps. As a result, the chains slacken and their securing action diminishes or disappears.

Apart from the large gaps present between the concrete components, criticism may also be directed at the shallow angle of the securing means in the upper area. Prestressing determines the effectiveness of tie-down lashings. When the prestressing means are at an angle of 90Â° to the loading area, 100% of the prestressing forces apply. At least on the uppermost concrete components, the effectiveness of the applied lashing means is reduced due to an angle which is in places less than 30Â° (see Fig. 3). At an angle of 30Â°, the vertical action is reduced by 50%. While securing means which are capable of applying large prestressing forces have indeed been used, since they act only by friction (wood against concrete, Âµ = 0.4) and, at angles of less than 30Â° (twice folded DIN A4 sheet of paper = an angle of 22.5Â° (see Fig. 4)), are reduced by more than 50%, the securing force in the rear stack at maximum prestressing of 2 x 2,000 daN is just enough to secure the topmost part of the load. 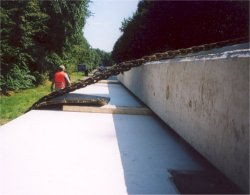 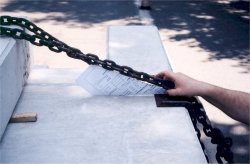 In fact, prestressing is virtually zero and two out of the four chains are lying slack on the load. As Figure 5 below shows, the tightener can easily be moved to and fro by hand. 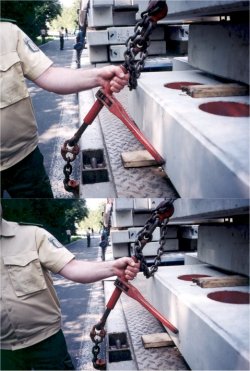 The front stack also has gaps in the load (see Fig. 6). If chains, which have only very slight elasticity, are used for tie-down lashing, it is absolutely vital for there to be no gaps in the load. If the load slips together by just 1 or 2 cm, the chains slacken and the prestressing becomes completely ineffective. Chains are not only robust, but they can also withstand major securing forces. However, if they are to do this, they must be used for direct securing and they are possibly unsuitable for tie-down lashing. 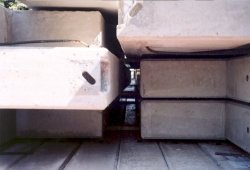 Since this vehicle is unsuitable for carrying concrete, considerable additional effort must be put into securing the load. The first three direct lashings around the front of the load, which prevent the individual components from slipping forwards, are clearly visible in Figure 7. In total, six belts are required just to secure the front stack of concrete in the direction of travel. In the rear stack, the concrete components are in each case secured with four loop lashings to prevent them from slipping together in the middle. A further four loop lashings prevent them from sliding towards either side of the vehicle. Another four loop lashings are required to secure the component placed on top of the stack, while four further loop lashings are needed as overhead loops to prevent the rear stack from moving forwards (see Fig. 8). 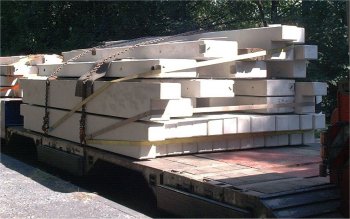 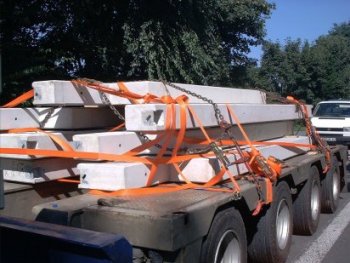 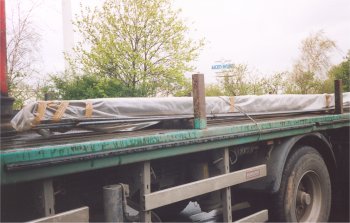 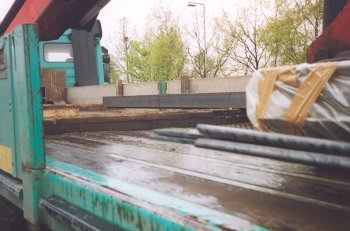 Various different sizes and shapes of long steel are being carried on an articulated truck with completely inadequate tie-down lashing consisting of a total of two wires. Due to their angle and minimal prestressing, these wires have very little load securing action. Moreover, there is a gap several meters in length in front of the load and there is no tight fit to the sides either. It is the shape of the steel and its high mass which makes it so particularly dangerous when the brakes are applied hard. Individual profiles or the entire load can slip forwards and crash through the headboard and cab, causing injury or worse to the driver.

This type of load can only be secured by direct contact with mobile or divisible headboards in front of the load (see Figures a to c below). Only loop lashings, never tie-down lashings, should be considered for side-to-side securing. Should it be possible to limit the load space to the sides by means of laterally repositionable pairs of stanchions in such a manner that a tight fit to the sides can be achieved, such securing is preferable.

This steel roll, which weighs 27 metric tons, has been secured with just two tie-down lashings. Assuming a friction coefficient of Âµ = 0.4  (this is a high value for this pair of materials), a weight-force of 10,800 daN has to be secured. The two tie-down lashings provided just 480 daN of this securing force, giving a shortfall of 10,320 daN. Since the vehicle was also carrying large quantities of heavy lumber, this was placed in front of the steel roll to provide a tight fit. Further belts were used as loop lashings to secure the roll to the front and side. 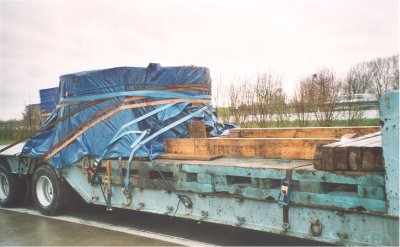 Assuming a friction coefficient of Âµ = 0.4, there is still a 2,700 daN shortfall in securing force. As explained above, the tie-down lashings would have been able to secure a force of only 480 daN. Subsequent direct securing, which requires the same effort as for a single tie-down lashing, provides a lateral securing action of 4,000 daN. Securing the roll directly twice (once on each side) could have provided 100% of the required lateral securing force.

U profiles and I beams

Bundles of U profiles and I beams are being carried on an articulated truck. The load had been loaded with a tight fit against the headboard so securing the load in the forwards direction, provided that the headboard has a sufficient loading capacity, Further securing is provided with wires, which are prestressed by means of load securing winches fitted to the vehicle. The wires are applied as tie-down lashings. Figure 12 shows the considerable gaps between individual steel packages. If there are any gaps in a load, tie-down lashing is utterly ineffective. When exposed to stresses, the packages will be able to slide together, as a result of which the wires will slacken and thus cease to secure the load effectively. 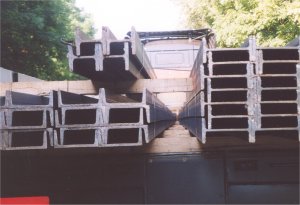 A further complicating factor is that, when tying down the top package of steel, the angles are so unfavorable that more than 50% of their securing action is lost. 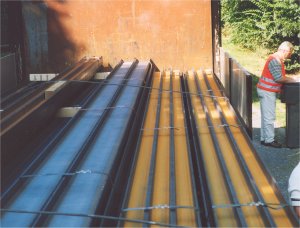 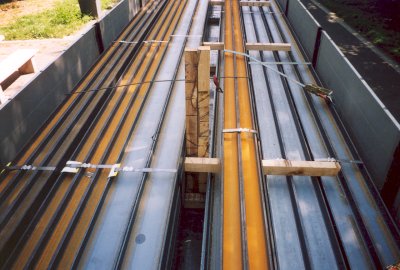 This example highlights the importance and worth of training for drivers and loading personnel. Proper inspection by the forwarder is as important as it is desirable.

A typical picture in the building materials trade, bundled concrete slabs being transported on pallets. 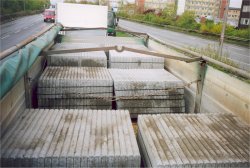 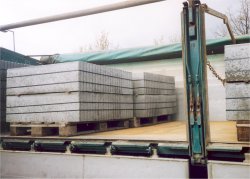 In order to distribute the load, the pallets have been spread around the vehicle, producing gaps of almost 1.5 m in the load. The concrete industry association has determined friction coefficients for concrete against wood of Âµ = 0.4 , while the friction coefficient of pallets on a steel loading area will be around Âµ = 0.3. The load was thus being carried on the vehicle with 50% of its weight unsecured just in the forwards direction. Since the load has not been effectively consolidated into a unit, load securing must simultaneously bundle the load and fasten it to the pallet and the loading area. It is advisable to handle this load as a block if permitted by the vehicle’s load distribution plan. Securing to the front is provided directly, for example by upright pallets and two loop lashings. The gaps to the side could be filled in with pallets. If this is not feasible, loop lashings should be used here too. 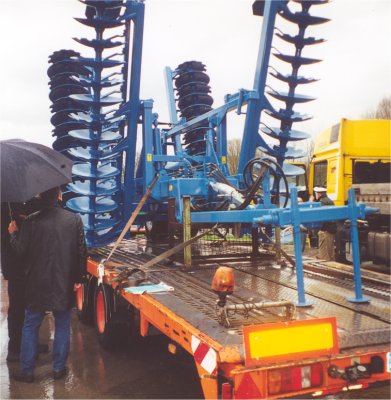 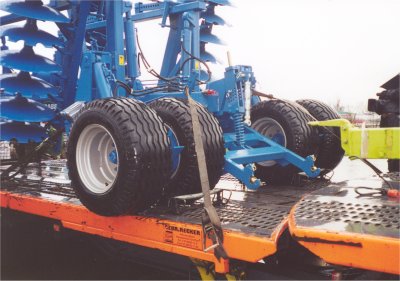 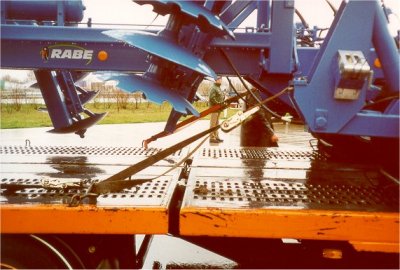 The following is a positive example of good practice in securing agricultural machinery on a vehicle carrier. The machine is secured only by direct lashing. The driver has taken account of the stresses which apply forwards, to the sides and backwards. As far as possible, the driver has even used two direct lashings at the center of gravity for lateral securing. The only problem with this exemplary securing job is that several worn out belts were used, so diminishing the effect of this fundamentally excellent securing job by around 50% and in some cases by around 70%. 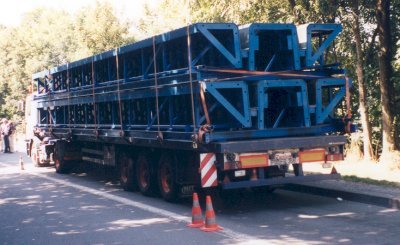 Two steel structures, each weighing 12 metric tons, have been loaded onto an articulated truck with a gap between them and the headboard. These structures are „secured“ by a total of six tie-down lashings. The upper part of the structure is additionally secured to the lower part by appropriate direct lashing. Closer examination reveals the following deficiencies:

Load securing could be improved by several direct lashings, which could very readily be attached to the steel components. 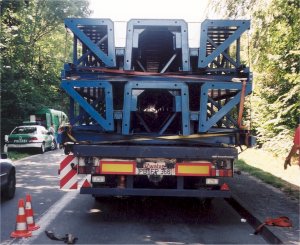 However, not all the belts could be used as four of the six belts are worn out. 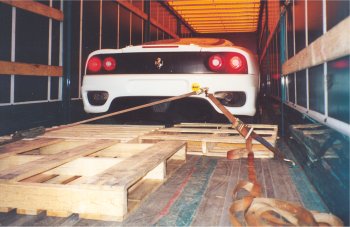 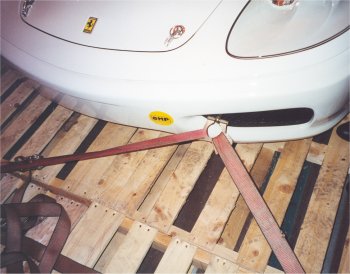 One frequently observed phenomenon is that valuable loads, such as this expensive vehicle, are really well secured. The pallets create a tight fit to the front against the headboard. This has been achieved by loading the vehicle with its tires resting directly against the pallets. The vehicle has additionally been diagonally lashed to both sides at both front and rear. Providing that the tow eyes are suitable for this purpose, this is a good securing method. The driver was unable to explain why pallets had also been placed behind the vehicle.

Figure 24 shows wedges which are specially attached to the vehicle so that the container can be loaded tightly against them. This load securing option was disregarded during loading. The load is also unsecured to the sides. This load should also be covered, as metal chips could be blown out of the dumpster container by a headwind (see Fig. 25). 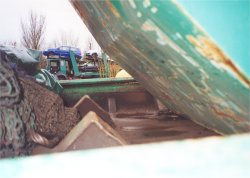 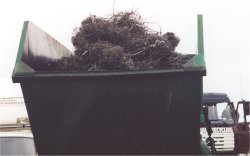 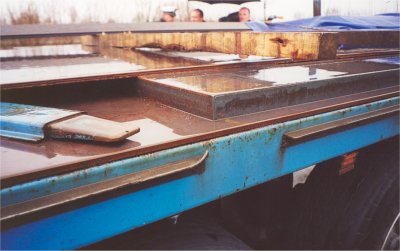 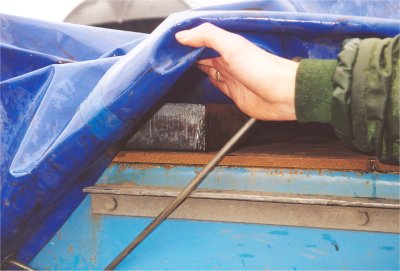 Steel sheets of various thicknesses and sizes loaded onto an open flatbed truck without a tight fit. The arrangement of this load can only be described as chaotic, no friction-enhancing material was used nor was a tight fit provided between the individual steel sheets or relative to the headboard. This kind of loading is hazardous to the vehicle, the driver and others and can only be described as potentially lethal negligence.

In this case too, steel wires were used for "securing". They were used as tie-down lashings, which for this kind of load and loading, are ineffective and uneconomic. The already slight securing action is further considerably reduced by the minimal angle. In addition, the wires were so lightly prestressed that they could easily be lifted up from the load by hand. 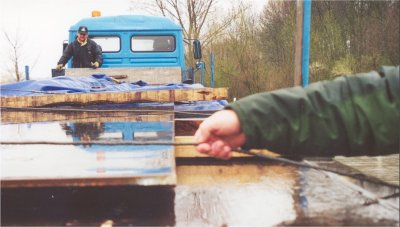 The combined load securing action of all the wires is zero. Adequate securing for such loads can be achieved by using friction-enhancing materials, providing a tight fit with vehicle parts and using loop lashings or direct lashings.